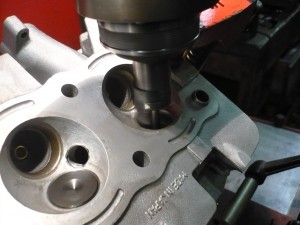 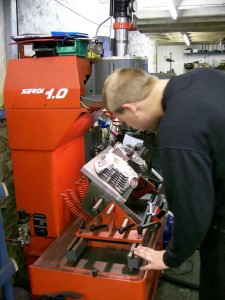 To ensure the best gas seal and gas flow the valve seat should have at least three angles; a throat angle, the seating angle that the valve sits against and a top angle to allow free passage of the gas around the valve into the combustion chamber (inlet) and from the combustion chamber (exhaust) .Higher performance engines may have multiple angles or a radius in this area. The valve seats must be uniform with each other on multicylinder engines to ensure the cylinder fill is the same for each cylinder.

The Serdi and Mira equipment that we use allows us to machine valve seats accurately by using carbide form tools which are shaped to the angles required, thus ensuring that the angles and seat width stay exactly the same on each seat re-cut. The valve seat is kept concentric to the centreline of the guide by the use of carbide pilots that are sized in increments of o.ooo4″,  so by using the pilot as a go-no go guage we can be sure that the seat to guide concentricity is better than 0.0004″ Once the pilot is fixed into the cutter head the quill that the cutterhead  runs in is supported on a massive spherical bearing that floats on compressed air to enable the whole assembly to centre nicely in the valve guide. The cradle that the cylinder head is clamped to also floats on air during this process. Keeping an accurate centreline means a much reduced sideways load from the valve to the guide as the valve lifts off the seat and sits back on it, so reducing wear and giving longer life on these components.

We still also occasionally use our PEG 8 orbital seat grinder, some early unleaded compatible valve seats were made of stellite which is too hard to cut with conventional tools so the grinder is useful in this sort of application.